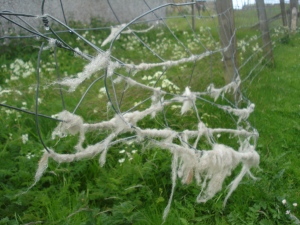 The first voice you hear is of weaver Catherine Campbell, recorded in her weaving shed and shop in Plocrapool, on the east coast of Harris in 2004. Catherine’s grandmother Marion Campbell (1909-1986) oversaw and conducted the entire tweed making process herself, from raising the sheep that provided the wool, spinning and dyeing the yarn for her loom right through to the finished tweed length and was awarded an MBE in 1985 for her service to the Harris Tweed industry. Catherine is proud of her own independent status as a weaver who “doesn’t work for the mill” weaving to her own designs rather than be instructed by the mill. She talks about how Marion used the older looms as well as about the birth of the industry. The next voice was recorded in a weaving shed near Callinish on Lewis in 1998 as the weaver tried to show me and my friend how to use the Hattersley loom. Threaded in are various atmospheres, voices and mechanical sounds from the mill at Shawbost, Lewis, recorded in 2006, just as it was about to be sold. The mill re-opened in 2007 and is currently the largest producer of Harris Tweed cloth supplying the fashion market. As well as the various machines for the washing, drying, dying and spinning of the yarn the weavers can be heard explaining some of the physical elements of weaving, many of which form spatial templates for the treatment of the recorded material in the composition.